Alexander the Great: Master of the Ancient World

This is a quick review of Alexander the Great: Master of the Ancient World by Doug Wilhelm, a biography intended for older children.  Why am I reading a children’s book about Alexander, you ask?  Because I was curious to see how the author would frame the relationship between Alexander and Hephaestion.

Hephaestion is mentioned on seven occasions in the book.  He is first introduced in a discussion on Alexander’s education at Mieza with Artistotle.  Hephaestion is called a handsome boy who will become Alexander’s lifelong friend.  He next shows up racing Alexander around the tomb of Achilles and Patroclus at Troy.  No mention is made of the possible homoerotic overtones of the relationship between the heroes.  He then receives a spear wound to the arm in battle.  His fourth appearance comes in the discussion of the trial of Philotas where it is explained that though Philotas proclaimed his innocence, Hephaestion and other Companions testified against him.  In his fifth appearance, Hephaestion is seen trying to arrange the adoption of proskynesis in a Macedonian-friendly manner.  He next appears at the mass wedding where Alexander marries him to the sister of the bride Alexander chose, both daughters of Darius III.  The last mention is the one I wish to focus the rest of the discussion on—his illness and resulting death.

Wilhelm explains it by saying, “[he] became gravely ill.  The doctor told him to rest, but Alexander’s lifelong companion continued to drink.  In a few days, he was dead.” (115)  Wilhelm goes on to quote Plutarch saying that Alexander who had witnessed literally thousands of gruesome deaths on the battlefield went wild with grief at this one.  He lists Alexander’s response as including cutting his hair, laying on the body weeping for twenty-four hours, and, upon returning to Babylon, building a 200 foot tall funeral pyre that was subsequently burned.  But most interestingly, Wilhelm claims that “with the loss of Hephaestion, Alexander seemed to lose confidence in the gods.” (116)  Quoting Plutarch again, he goes on to say that Alexander became downhearted and increasingly suspicious of friends.

I think in his reaction we see bipolar disorder already exacerbated by some severe head injuries and a collapsed lung further exacerbated by extreme grief.  This idea of bipolar Alexander is one that I am currently researching in hopes to share future thoughts with you. 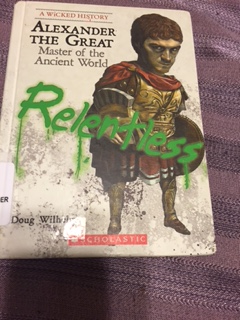 Like Loading...
This entry was posted on Tuesday, September 6th, 2016 at 4:22 pm and posted in Uncategorized. You can follow any responses to this entry through the RSS 2.0 feed.
« Hephaestion’s “Fans”
Review of J. Reames’ “An Atypical Affair? Alexander the Great, Hephaistion Amyntoros and the Nature of Their Relationship” »

One response to “Alexander the Great: Master of the Ancient World”

Alexander the Great - He lives and reigns